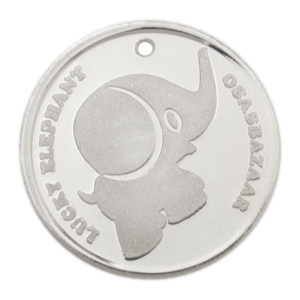 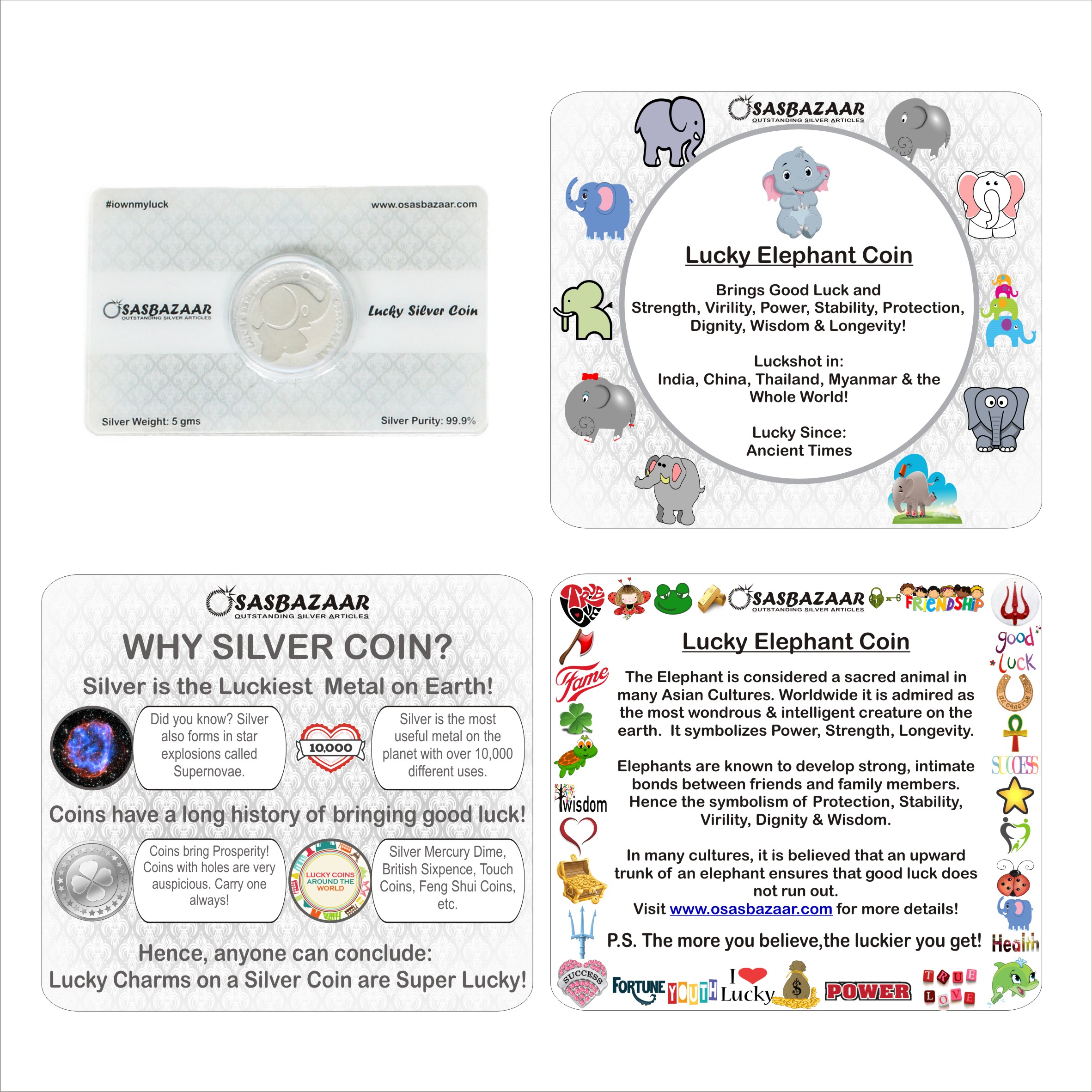 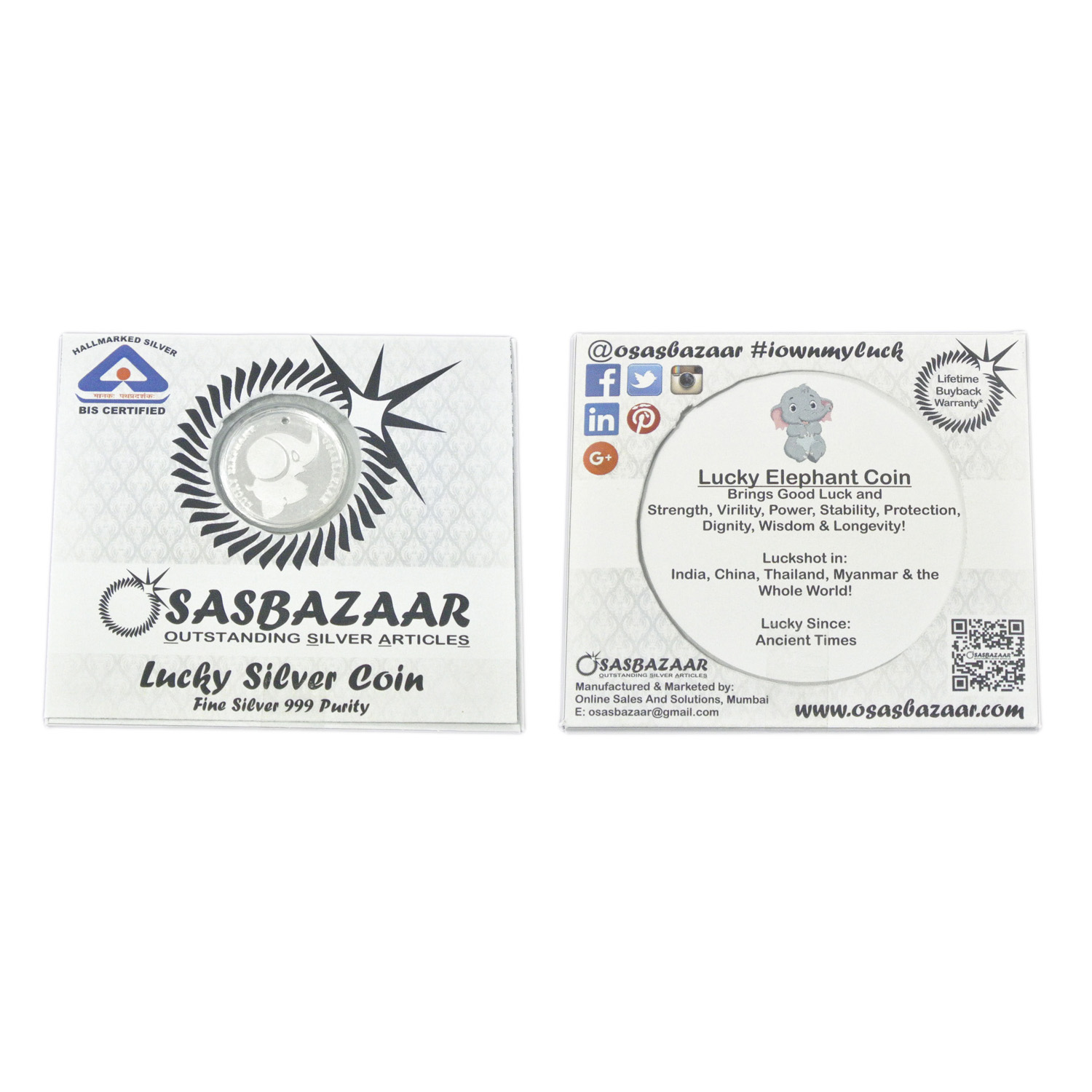 Material: Lucky Elephant Silver Coin is made of Silver Metal of 999 Purity. Weight of Silver is 5 grams.

Design: One side of the coin has a Lucky Elephant on it with Matte Finish. Instead of using a normal elephant we used the cutest and luckiest picture we could get our hands on. The other side gives details of luck. The text is in Matte Finish. The coin has a tiny hole on the top which many consider lucky and it also facilitates other uses for the coin as an accessory.

Packaging: Comes in an exquisite plastic card which is then packed into a beautiful envelope. We send various freebies to accessorize the coin. We send a Free Silver Care Kit with this product!

Certification: This product is BIS Hallmarked. BIS hallmark is an official guarantee of purity of precious metal articles.

Gift Occasions: This is an ideal gift for any occasion from birthdays and anniversaries to festivals and weddings. It is a perfect corporate and social gift.

Ideal Gift For: Gift it to yourself or anyone who needs a little luck on his/her side.

It's look.very nice and attractive as my daughter loves it .so I decided and give it to her.thanks osasbazaar.and one more thing I like most that you give liquid with this product which is very nice. To clean and protect the product.as a customer I love this.
Check the original review here!

The Elephant is considered a sacred animal in many Asian Cultures. Worldwide it is admired as the most wondrous & intelligent creature on the earth.  It symbolizes Power, Strength, Longevity.

In many cultures, it is believed that an upward trunk of an elephant ensures that good luck does not run out.

Origin of Elephant as a Lucky Symbol

The notion that elephants bring good luck has a long history. Elephants have been admired by humans for many centuries. Aristotle, the ancient Greek philosopher claimed that the elephant surpassed all other animals in wisdom. In Hinduism Elephants have been considered sacred and lucky ever since the Incarnation of God. Ganesha, a Hindu Deity with an elephant’s head, is the Hindu God of Luck & Success! Even the Feng Shui principles consider Elephant as a Good Luck symbol.

Elephants are favorite animals of some powerful Gods. They are hence considered a symbol of royalty and fertility. A White Elephant called Airavata is the royal mount of God Indra – the King of Gods! The Elephant is considered to be a very feared weapon of God Indra. It is believed that an Elephant Symbol will bring God Indra’s blessings to you in the form of Strength, Dignity and Power! In Jainism it is believed that an Elephant possesses power of 500 Lions!

Elephant has a most auspicious symbolism. They embody strength and power, especially power of the libido. Male elephants are more likely to rage out of control when in rut. Because of this the Elephant is seen as a symbol of great Sexual Power or Virility!

Lucky Elephant for Wisdom and Stability!

Elephants are intelligent animals. Elephants have the largest brains of all mammals.  Elephants master the task of using tools. They have a superb memory. Elephants are capable of showing great compassions and expressing grief. The Hindu God of Wisdom, Ganesha, is depicted with an elephant’s head. No wonder keeping an Elephant with you brings you wisdom.

There is a legend linking Elephant to wisdom. Maya (also called Queen Mahamaya) was the mother of Siddhartha Gautama who founded Buddhism. She had a very special dream. She dreamt that she had been carried away by four spirts (devas) to a place called Lake Anotatta in the Himalayas. There she bathed and got dressed in a divine gown. As she was resting a small white elephant carrying a white lotus flower in its trunk appeared. The elephant approached her and walked three times around her. The white elephant then entered her right side. The elephant vanished and Maya woke up. Ten months later Siddhartha Gautama, the future Buddha was born from her right side. During labor she held on to a branch from a Sal tree and felt no pain. Queen Maya died in delight after seven days to join the gods. Many believe it was Siddhartha (The Enlightened One) who entered her womb through the elephant. Keeping an Elephant with you might just give you the wisdom and understanding you need at the right time!

Lucky Elephant for Longevity and Protection!

The story of why an Elephant is considered to be a symbol of Protection and Longevity is related to the birth of Hindu God Ganesha as narrated in the Shiv Purana. One day Goddess Parvati was at home on Mt. Kailash preparing for a bath. As she didn’t want to be disturbed, she told Nandi, her husband Shiva’s Mount Bull, to guard the door and let no one pass. Nandi faithfully took his post, intending to carry out Parvati’s wishes. But, when Shiva came home and naturally wanted to come inside, Nandi had to let him pass, being loyal first to Shiva. Parvati was angry at this slight, but even more than this, at the fact that she had no one as loyal to Herself as Nandi was to Shiva. So, taking the turmeric paste (for bathing) from her body and breathing life into it, she created Ganesha, declaring him to be her own loyal son.

The next time Parvati wished to bathe, she posted Ganesha on guard duty at the door. In due course, Shiva came home, only to find this strange boy telling him he couldn’t enter his own house! Furious, Shiva ordered his army to destroy the boy, but they all failed.

This surprised Shiva. Seeing that this was no ordinary boy, the usually peaceful Shiva decided he would have to fight him, and in his divine fury severed Ganesha’s head, killing him instantly. When Parvati learned of this, she was so enraged and insulted that she decided to destroy the entire Creation. At her call, she summoned all of her ferocious multi-armed forms, the Yoginis arose from her body and threatened to destroy all. Lord Brahma, being the Creator, naturally had his issues with this, and pleaded that she reconsider her drastic plan. She said she would, but only if two conditions were met: one, that Ganesha be brought back to life, and two, that he be forever worshipped before all the other gods.

Shiva, having cooled down by this time, agreed to Parvati’s conditions. He sent Brahma out with orders to bring back the head of the first creature he crosses that is lying with its head facing North. Brahma soon returned with the head of a strong and powerful elephant, which Shiva placed onto Ganesha’s body. Breathing new life into him, he declared Ganesha to be his own son as well, and gave him the status of being foremost among the gods, and leader of all the ganas (classes of beings), Ganapati.

And so Elephants are considered to offer protection and longevity of life! Keep one with yourself always!

♥ Placing or hanging a Silver Lucky Elephant Coin, at the front door brings good luck, protection and strength to the household. It also helps you to keep the powers that you attract and maintain inside the house. The Elephant acts as a housekeeper as it guards the door. Such an elephant is also referred to as Elephant of many blessings.

♥ A Silver Lucky Elephant Coin or a pair of these coins when kept in the bedroom, promotes love and faithfulness between two people.

♥ Placing or hanging a Silver Lucky Elephant Coin in the children’s room will make the bond between the children and parents stronger.

♥ Couples that want to have a child should place or hang a Silver Lucky Elephant Coin in their bedroom, as a symbol of fertility. Often seven coins are used in the bedroom to activate chi energy for fertility since in Feng-Shui the number seven represents children.

♥ Placing or hanging a Silver Lucky Elephant Coin in the children’s room will bring them knowledge and academic success. Place or Hang it near the study desk or wherever the children do their homework.

♥ Many business owners in Asia believe that a Silver Lucky Elephant Coin should be kept in the office. It is believed to provide stability and wisdom to the company and thereby protecting the company from ill fortunes.

♥ Keep a Silver Lucky Elephant Coin near your body like in your pocket, wallet or jewellery to channel its strength and power into you. This will boost your self-confidence and help you overpower others.

♥ Keep a Silver Lucky Elephant Coin in your room to boost your health and improve your life expectancy!

This Lucky Elephant Coin Might Just Bring The Required Luck in These Times!

We believe a little luck on your side, goes a long way. So why not keep all the lucky charms with you all the time? But if you don’t want that, we have identified certain times and situations where this Lucky Elephant Silver Coin might just bring the required luck to your side…

You thought only we are crazy about The Elephant? Wait till you see these celebrities proudly showing off this ancient symbol of luck. These are collected from various pictures available over the internet.

Lucky Elephant on a Silver Coin!

Even an Indian God flaunts the face of an Elephant. It was only right that you believe in this ancient lucky charm. However we bring this lucky charm to you on a 99.9% Fine Silver Coin. May it bring you Strength, Virility, Power, Stability, Protection, Dignity, Wisdom & Longevity!